Welcome to my new journal for translations! I began translating stuff about a year ago and recently I realized there are quite a few of them and they are all scattered here and there so I decided to create a place to keep them. Currently most of my translations revolve around NEWS but there's quite a bunch of Alice Nine translations as well. I also sometimes provide download links to the shows I translate.

You are welcome to look around and join the comm!

Index of Translations (The Alice Nine ones for now):

A collection of random tour reports, translated from the Japanese Twitter accounts. 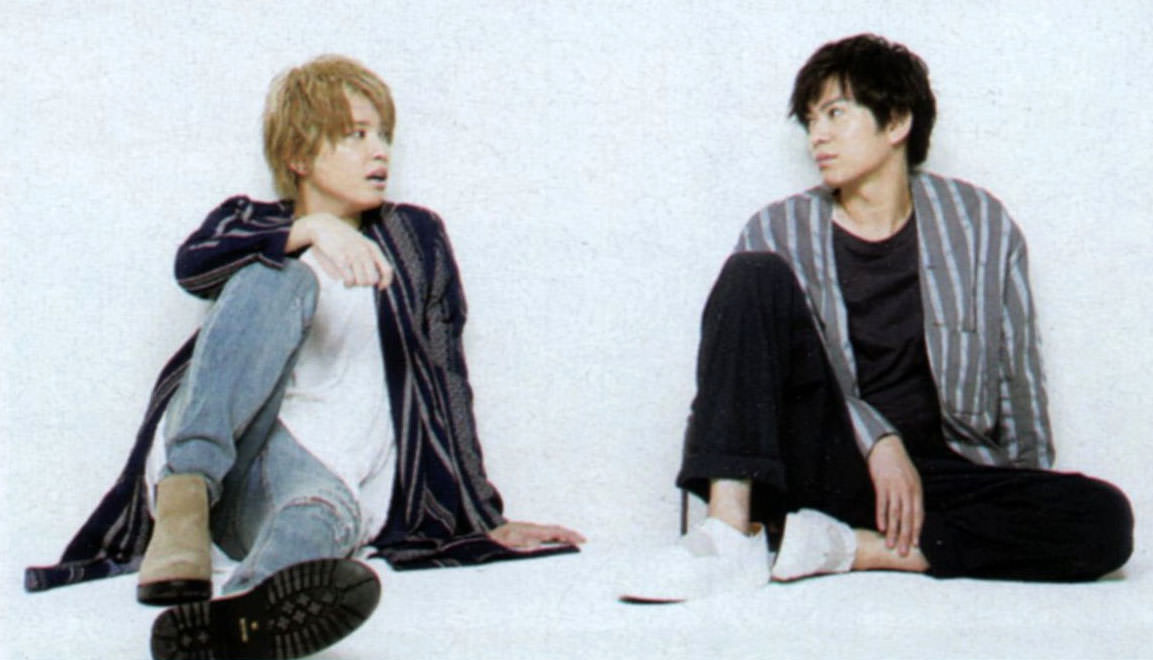 The interview for TV Guide concerned Inochi no Uta, Hiroshima, and Tegoshige’s connection to it. It was unusually deep and serious so I felt compelled to translate it. Some parts were pretty hard to get so feel free to tell me if you find any inaccuracies.

A collection of random tour reports, translated mostly from the Japanese Twitter accounts. Slightly reworked, expanded and illustrated according to the DVD footage.

Haven't posted here in a long time but this is a very special episode and wanted everyone to hear it. There might still be minor inaccuracies, mostly because Japanese language itself is tricky but I did mt best. The video I attached is missing about a minute, from when they start talking about Sakura Girl. I couldn’t find another one.

Basically, both parts of February’s issue of Photoshigenic were dedicated to Tegoshi. And let me tell you they are priceless. I’ve been sitting on these treasures long enough so now this is my gift to you…

Daringly, he comes up with one prank after another.

I got an instant camera from a friend as a birthday present (but it’s an amazing one where you can change lenses) so I was snapping away during the “Hikari no Shizuku” filming. So, this person, Tegoshi Yuya’s pranks towards Koyama-san now surpass the level of pranks. The day of filming he also took Koyama-san’s clutch bag when he wasn’t there and put it in the fridge. (by the way, the man himself stubbornly claims he didn’t do it but… how true is that?) On top of that, the clutch bag had a lot of metal parts. They’re all frozen. Also he sent a ton of stamps (apparently, it was over 300), and brought Koyama-san’s personal bag to the filming site. Finally, he put his phone into his underwear (next to the skin…) so he did some impressive pranks. I’m saying they’re too daring!!! But I’m sorry, Koyama… I laughed a lot… actually, even the victim Koyama-san while shouting “Whyyyyy?” looked kind of pleased. And thus, later on I’ll introduce you to the latest and the funniest prank.

The dance of ripped underwear

This happened during the free time at Best Artist. Koyama-san as always came after his live broadcast ended. Next to him Tegoshi Yuya was changing. Once he was down to just underwear, instead of putting on clothes, he started doing an odd dance. Huh? You ask “why?”? I can’t take that question. That’s just the kind of man he is. While he was doing that, apparently having some kind of business, Koyama-san left the dressing room. Yet, Tegoshi continued dancing. The intensity of the dance kept increasing and so came a moment when I thought he might be slipping into madness. And then… R-r-i-i-p-p! …what was that weird sound? …Though rather than saying it was a weird sound, I can also say it’s the funniest sound in the world. I looked up to confirm and was once again struck by the sight of it. I nearly ripped my belly. Almost died of laughter… We had to go on air soon though. There was no other option but to send the manager to buy new underwear. He put the new underwear on and the one he tore… yes, you can imagine what happened next, right? The torn used underwear Tegoshi-san threw into Koyama-san’s clutch bag. And zipped it. He was waiting to find out when Koyama-san will notice. Koyama returned, we went to perform, we got back… and he went home without having noticed. He only found out the next day before he had to go to “every” so nobody saw his reaction!! I really feel sorry for him but I’m thankful for always making me laugh!!!

I assume this broadcast wasn’t live but was likely recorded at the same time as the live one. I was gonna do only highlights but in the end I only skipped some parts. The intro was just some light fooling around.

This one was very anticipated but there were also a lot of concerns over the combination of a live broadcast and Tegoshi. They even spent a good portion of the intro just trying to work out a defense mechanism just in case he says something inappropriate such as beeping him out manually. They first made Massu do the “beep” but it came out as a weird high-pitched “iii” instead. Then Shige did a much lower “piii”, then Koyama did one but they said he was being too conscious and made him re-do it without trying to sound cool. Anyway, in the end the censorship wasn’t even needed since Tegoshi was relatively tame. However, Shige got on the same wavelength as Tegoshi and was occasionally indulging his weird digressions.

So here are Tegoshige’s two appearances on Ofutarisama Radio on TOKYO FM hosted by Toshiaki Megumi.

I really like this radio not just because there’s Tegoshige honestly talking about each other, but also because it’s one of those rare times when Tegoshi’s a complete sweetheart on the radio and not a vulgar jerk.

It was a lot of work and some parts may be a little unclear, can’t help that, I don’t have the recording. Also I dropped the honorifics. Not sure why. Anyway, enjoy.

Here are all of my translations of White Tour 2015 reports, excluding Osaka concerts from May 1 and 2. I was gonna fill them in later but I never felt like it so just take these. Too much of a hassle to repost from tumblr so just giving original links.